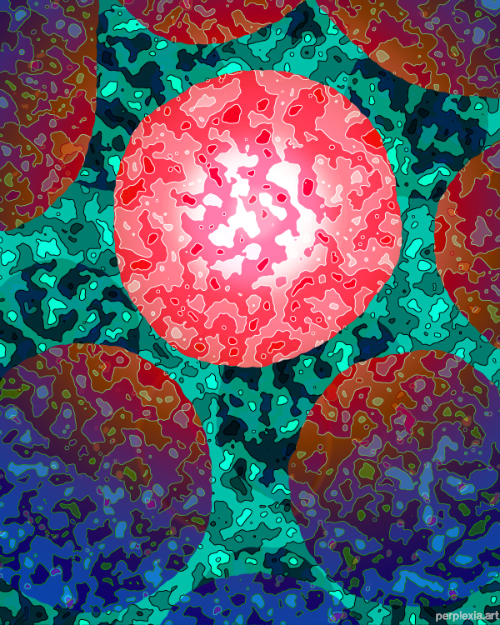 A Multitude is my biggest and most obvious “multiverse”-inspired work of art.

To me, each orb here represents one full universe, and there’s also all this space in between them that I guess you could call the fabric of the multiverse. A view like this, to see a whole universe, containing both space and time, as one glowing sphere amongst many, is something reserved for only a god of gods. Perhaps a god of gods of gods. It doesn’t get much higher than that.

Why is the main one glowing? I don’t think it’s because there’s a “prime” universe, as if the universe you’re in right now just so happens to be the Main Universe Ever. It’s all relative. Other universes are foreign to you, but you’re just as foreign to them, and neither of you are “right.” You may live on Earth-1 to you, but who’s to say that Earth-945 doesn’t call themselves Earth-1 too?

I also like the darker ones behind it. Although this piece long predates DC Comics’ “Dark Multiverse,” I do like the idea of there being some other, darker set of universes underneath the rest. It’s a fascinating idea even if DC really sort of fumbled it by wasting it all into one plot-armored character.

To get back to your correct universe, please see the full resolution version of this image below: