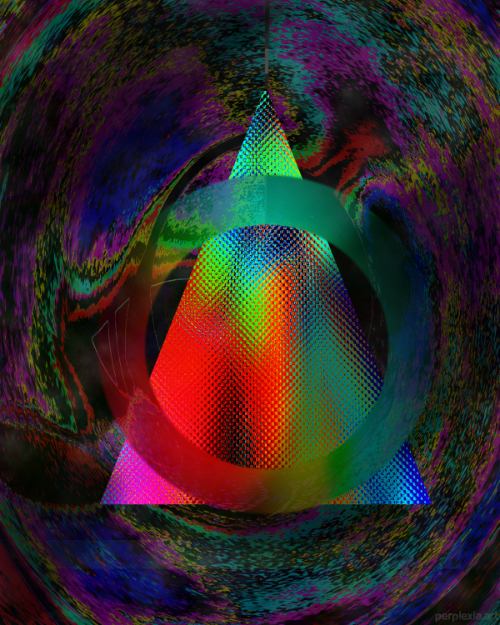 Originally supposed to just be a piece of test art, Forced Leather came about while I was experimenting with textures and shapes. And the texture of this one really gets me. The metal glimmers on that triangle, wow! And I have this piece on aluminium in real life, showing off the metal texture better even better than plain metal can express itself.

In sketching, circles, rectangles, and triangles are the basic shapes to create anything; sketching a human involves a circle for a head, a rectangle for an abdomen, rectangles for arms, circles and triangles for joints and features, and then on a layer above that you start sketching more exact details. Shape studies are not uncommon in beginner drawing classes.

But these forms have an even older inspiration for me, from Japanese monk and artist Sengai Gibon in 1800. The Universe represented the formless, the form, and the form doubled into eternity: 〇△□. It’s a simple concept that fascinates me to this day. I’ve repeated studies on this years and years before I even thought about abstract art, and it remains a prominent potential tattoo idea in my mind.

You can see in my piece how the circle, in front of everything and thus at the “start,” is blurry, vague, and representative of the “formlessness” as Sengai posited. The triangle, behind it and coming “next,” is textured in gritty detail, reinforcing the idea that this has definite form, solidity and mass. And the shape of the piece itself is a rectangle. This incorporates the canvas itself into the process, implying that the doubling is repeated again and again beyond and outside the canvas itself, yet the circular patterns here take some of that formlessness and show that it’s inherently contained within the form, forever.

Or at least that’s how it made sense in my mind.

Here’s the full resolution detail on that texture I was raving about before: