So, technically, this event was called “John de Leon Martin and Casey Kauffmann” and I’m flipping the names around. That’s because Casey is the person we came to see. I went with Alex, and Alex works with Ben, and Ben is dating Casey. Thus, Casey’s art show. Sorry John.

The event was held at Human Resources LA, which is a very neat art gallery space. We visited on Saturday, August 20th, 2022 — the last day it was open!

A large projected video on the left wall, with custom printed cushions, digital loops on display screens, and paintings, sketches, and vines.

Past the entryway area, it opened up into this one huge room. The first thing anyone would notice was the movie playing on the wall, full of reality tv references, cats, memes, and some things I recognized from art school.

When we first arrived, I think we believed this was all Casey’s work (again, sorry John). We didn’t realize it was a joint show until later. But as we learned, anything moving — the projection, the display monitors on the walls, the old box tvs in a different corner — was all Casey. Anything still — the paintings, the sketches, etc. — that was all John.

The projected film was a collage video called Knowing Others and Wanting to be Known, by Casey. Alex and I sat on the custom designed chairs and watched.

Those tvs in the corner were also displaying Casey’s other works.

Casey is a lecturer at UCSD, and focuses a lot on internet-sourced art collages, along with reality TV and bright neon colors. I found it interesting because it humanized elements of reality tv. It made me think about people through history struggling with knowing themselves and being known by others (as the title would suggest), and the maximalist themes are always a great break for me.

John’s work was comprised of a number of large paintings, surrounded by clusters of sketches — some finished, some rough ideas. Vines and paint ran through the sketches from paper to paper in designs I found very fulfilling, and the cluster idea was great. John later told us that it partially represented how no art exists in a vacuum, how there are always plans and inspirations and other things going into each piece.

Walls of John’s paintings and sketches.

I spotted a Naomi Elizabeth ref in one of them, and many of them were heavily influenced by Dungeons & Dragons.

I liked the Animorphs sketch over here, as well as Peach on the other wall. I think that peregrine falcon is Tobias, right?

John’s colorful sketches, with a couple of Casey’s video collages plugged in between.

I LOVED that he also included this painted portfolio case. What a cool idea.

The portfolio bag as a part of the portfolio. Would one then put this into an even bigger bag?

John and Casey’s work was interspersed throughout the whole room. Although later we decided that John’s work was more fantasy-gaming-oriented while Casey’s was more reality-television-meme-oriented, they blended together so well that it absolutely could have been from one artist expressing a totally consistent view. Apparently, someone who knew both of them made the same connection from seeing both of their work, and that’s how the idea for this show was born in the first place.

I’m aware you can’t make out anything on the screens, but trust me, it’s a consistent theme.

John was actually the one working the front desk, and Casey had just left for some food when we had arrived but returned later on. There were other visitors here too, but after they cleared out, we introduced ourselves (I think Alex had met Casey once or twice before in person) and had the chance to ask them all about their work. Both of them shared fascinating, never-before-heard insights that I will not reproduce here in any form.

By the way, this was Human Resource’s official promotional image, which I enjoyed a lot: 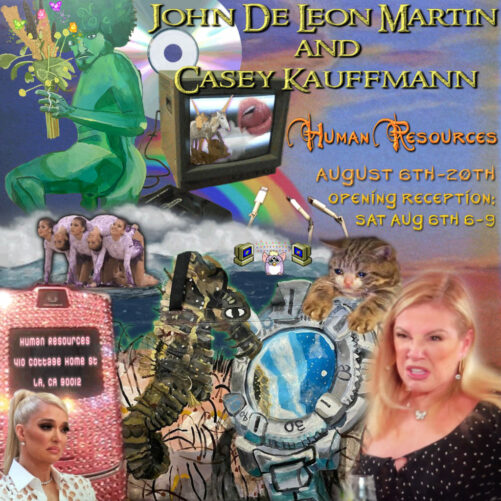 Almost hard to tell what’s from who.

All in all, a great display.